WE THE PEOPLE RADIO.US
Search

Shows we did with the late great Dr. Peter Vincent Pry

Get periodic show updates.   No junk mail and no spam ... EVER!

America lost one of its most formidable national security practitioners and most inspiring patriots Friday evening with the untimely passing of Dr. Peter Vincent Pry, PhD. In the course of a career spanning nearly forty years, Dr. Pry served with distinction first in the executive branch of the federal government as a Verification Analyst in the Arms Control and Disarmament Agency (1984-1985) and as an Intelligence Officer in the Central Intelligence Agency specializing in Soviet nuclear forces and doctrine (1985-1995).

Subsequently, Peter Pry was a Professional Staff Member on the House Armed Services Committee from 1995-2001. In that capacity, he played a decisive role in enacting legislation in 2001 establishing the blue-ribbon Commission to Assess the Threat to the United States from Electromagnetic Pulse (EMP). He went on to serve as the Commission’s Staff Director, under its formidable Chairman, Dr. William Graham.

With Dr. Pry’s tireless help, the EMP Threat Commission produced multiple reports, briefings and congressional testimonies that constitute the most authoritative and comprehensive analyses of the grave vulnerabilities associated with our most critical of critical infrastructures – America’s electric grid.  It was Dr. Pry’s life’s work to have the Commission’s recommendations concerning steps necessary to “harden” the grid fully implemented.
Peter Vincent Pry was also a staff member of two other congressionally mandated commissions: the Commission on the New Strategic Posture of the United States (2006-2008) and the Commission on the Strategic Posture of the United States (2008-2009).

At the time of his passing, Dr. Pry was the Executive Director of the Task Force on National and Homeland Security, a congressional advisory board dedicated to achieving protection of the United States from electromagnetic pulse (EMP), cyber-attack, mass destruction terrorism and other threats to civilian critical infrastructures on an accelerated basis. In addition, Dr. Pry was the Director of the United States Nuclear Strategy Forum, another advisory panel to the Congress, which is focused on developing policies to counter weapons of mass destruction. He was also a Senior Fellow of the Center for Security Policy.

As part of his tireless advocacy for protecting the electric grid, Dr. Pry authored nine books (including The Long Sunday and Blackout Wars) and countless essays and op.eds. He also gave innumerable TV and radio interviews and appeared in a number of documentary films, including a newly released one narrated by Dennis Quaid entitled “Grid Down, Power Up.”

Peter Vincent Pry was a founding member of and inspiration for the Center for Security Policy’s Secure the Grid Coalition. Like him, the Coalition is dedicated to task of protecting every American by ensuring that what is formally known as the “bulk power distribution system” upon which virtually all of us are critically dependent is finally made resilient to all hazards, including EMP, as well as reliable.

Dr. Pry has been properly described as truly a national treasure. He will be sorely missed by all those who love freedom and dedicate their lives, as he did so nobly and effectively, to securing it.
​
Peter Vincent Pry is survived by his wife, Ruth, and son, Frank.

To learn more about the important work of Dr. Pry to secure the grid, visit griddownpowerup.com.

"Blackout Warfare" is the term used in this report to describe a revolutionary new way of warfare planned by Russia, China, North Korea, and Iran that is little understood in the United States, but poses an imminent and existential threat to Western Civilization. These potential adversaries plan to use cyber-attacks, sabotage, and electromagnetic pulse (EMP) weapons in combination to blackout national electric grids to achieve quick and decisive victory. Blackout Warfare that paralyzes the U.S. electric grid and other critical infrastructures--communications, transportation, natural gas and petroleum, business and finance, food and water infrastructures, and the military--could kill most Americans. The EMP Commission estimates up to 90% of the U.S. population could perish from a nationwide blackout lasting one year. The military would be paralyzed by a nationwide blackout, as CONUS military bases depend for 99% of their electricity upon the civilian electric grid. Yet Washington does not understand the threat from Blackout Warfare. 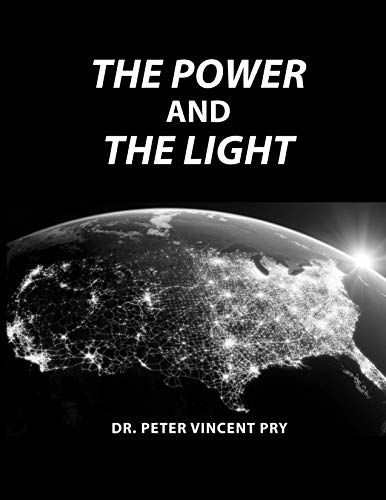 The Power And The Light: The Congressional EMP Commission's War To Save America 2001-2020

Electromagnetic pulse (EMP) manmade or natural, from solar superstorms, can blackout electric grids and other life-sustaining critical infrastructures, putting at risk the lives of millions. 9 of 10 Americans could die from starvation, disease, or societal collapse from a nuclear EMP attack that blacks-out the U.S. for a year. A solar superstorm could blackout electric grids worldwide, putting at risk the lives of billions. A small heroic band of scientists and national security experts serving on the Congressional EMP Commission have been striving for 20 years to protect America from the existential threat that is EMP. Their war to save America from ignorant armies that are the government bureaucracy, electric utility lobbies, and an irresponsible press is not yet won, and may soon be lost. 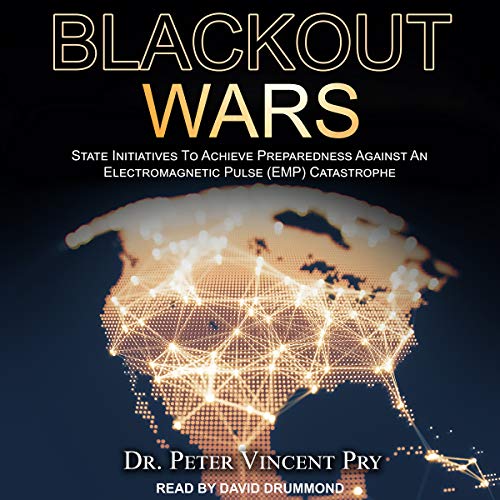 Blackout Wars is about the historically unprecedented threat to our electronic civilization from its dependence on the electric power grid. Most Americans have experienced temporary blackouts and regard them as merely an inconvenience. Some Americans have experienced more protracted local and regional blackouts, as in the aftermaths of Hurricanes Sandy and Katrina, and may be better able to imagine the consequences of a nationwide blackout lasting months or years, that plunges the entire United States into the dark.  read more

The electromagnetic pulse (EMP) threat to the United States is existential and growing. EMPs can occur with a nuclear explosion in space, cyberattacks, terrorist attacks, physical threats or a large coronal mass ejection from the sun, all of which are described in this book. Any of these EMPs could wipe out not only our electric grid, but anything with a computer chip in it, sending the U.S. back to the 1850s. Within a year after grid failure, the EMP Commission tells us that 9 out of 10 Americans will succumb to dehydration, starvation, gang and other violence, murder, suicide, breakdown of society and diseases. The government needs to take action now by forming an EMP Manhattan Project that focuses on hardening our electric grid. If it doesn't, those who survive will be existing in a country unrecognizable.  read more 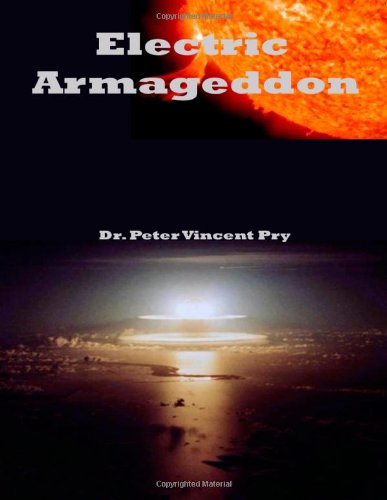 Imagine an America in a permanent blackout, without electric power, without communications, without mass transportation, without banking and finance, without food and water. Imagine the machinery of modern civilization stopped--in an instant. Imagine the high-tech EMP threat killing millions of people the old fashioned way, through chaos, starvation, disease, and societal collapse. Sound impossible? The EMP threat is as real as the nuclear weapons programs of Iran, North Korea, China and Russia. More fantastic still, imagine that Mother Nature can make an EMP that would collapse the machinery of modern civilization everywhere on planet Earth. Imagine that the Sun can make something like an electrical hurricane in space--that we shall call a great geomagnetic storm--that would destroy electronic systems and collapse critical infrastructures everywhere. Imagine that great geomagnetic storms occur about once every century. Imagine that the last great geomagnetic storm was in 1859, before civilization became dependent upon electricity. Imagine that our modern electrified societies are now overdue to experience a natural EMP catastrophe. Incredible? It is all true, and as real as the Sun.

War Scare: Russia and America on the Nuclear Brink

Why do some American intelligence officials maintain fallout shelters and private contingency plans to evacuate their families in the event of a Russian nuclear strike―even in today's post-Cold War era of U.S.-Russian partnership? The frightening answer lies within the pages of War Scare, a terrifying assessment of the prospect for nuclear holocaust in our day. Written by Peter Vincent Pry, a former CIA military analyst, War Scare provides a history of our country's little-known brushes with nuclear war and warns that, contrary to popular opinion and the assurances of our political leaders, the possibility of a Russian attack still exists. Nuclear deterrence has been the foundation of Western security for the last 50 years, but since the end of the Cold War, Russian military doctrine has become more destabilizing, and much more dangerous, than is commonly believed.   read more

"POSEIDON: Russia's New Doomsday Machine" describes Moscow's unmanned automated drone submarine designed to deliver a 100-megaton warhead to inundate U.S. coasts with nuclear tsunamis, leaving the most populous parts of America radioactive wastelands. Is this the real purpose of POSEIDON? What are the strategic implications of this new doomsday weapon, the latest in a series of Russian doomsday machines? What are the implications of the marriage in POSEIDON of Artificial Intelligence with the most powerful nuclear weapon ever built? Author Dr. Peter Vincent Pry is one of the nation's foremost experts on nuclear weapons and strategy. Pry is Executive Director of the Task Force on National and Homeland Security and of the U.S. Nuclear Strategy Forum, both Congressional Advisory Boards. He served as Chief of Staff of the Congressional EMP Commission, on the staffs of the Congressional Strategic Posture Commission and the House Armed Services Committee, and in the CIA. 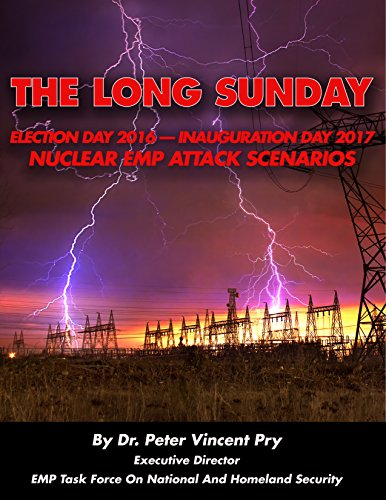 Imagine. It’s Sunday. The election is over. You are either anxious to watch the inauguration, dreading it, or escaping by watching Netflix instead.  You raked leaves in the morning, then watched your favorite football team win. You had dinner, and as the long day is winding down, you are watching a coveted DVD with your family. The lights flicker, then everything goes black. You head to the electric junction box in your basement. Your flashlight shines on all of the circuits. They’re all tripped, but trying to switch them back on doesn’t work.  Back upstairs, you check your watch, but the light won’t go on when you press the button and the face is blank. You move to your bay window and look outside. No light anywhere for as far as you can see.  You pick up your cell phone, press 911 and, nothing. You pick up your electronic land line and there’s no dial tone. You check your laptop to try to get the local news station on the web. It won’t boot up. You decide to drive to your friend’s house across town to see if he’s all right. You hop in your car and turn the key and, nothing. It won’t even turn over. 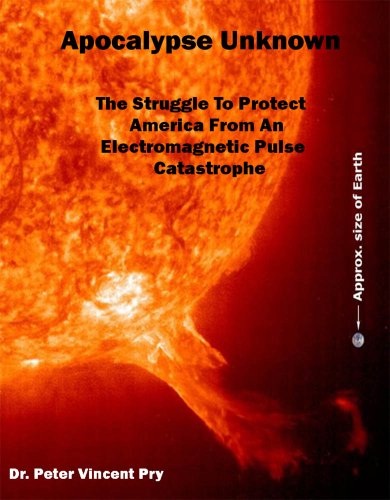 Apocalypse Unknown: The Struggle to Protect America From An Electromagnetic Pulse Catastrophe

Americans are not being told by the news media about the biggest story of their lifetimes. Every night every television news channel is desperately worried about the global economic crisis, looming recession, protracted unemployment, Wall Street and the housing market, government spending and taxation, and "going over the "fiscal cliff." But there is a much bigger untold story about a threat to the global economy--and to the very existence of global civilization--yet so rarely mentioned anywhere that, as described by the title of this book, it is an "Apocalypse Unknown."  The biggest story is this. December 2012 commenced the solar maximum, and significantly increased the possibility of a geomagnetic super-storm, something like a space hurricane, that could collapse electric grids and all the critical infrastructures that support modern civilization, and the lives of billions worldwide.  The Sun is a gigantic ongoing thermonuclear explosion, equivalent to billions of nuclear warheads detonating every second, contained by gravity. During the solar maximum the Sun hurls into space more solar flares and coronal mass ejections--basically enormous chunks of itself, many times larger than the Earth. If one of these solar torpedoes hits the Earth, it could generate a powerful electromagnetic pulse (EMP) that would collapse electric power grids everywhere, plunging every modern nation into a protracted blackout. Perhaps permanently.  Worldwide, billions could die.